We strolled down the long street of Faubourg-Saint-Antoine that leads to Place de la Nation. The faint light at the end of the day was still on but the wind was already setting in its chilly air. A bookstore on the way stopped us with its display of summer-themed books at the window. Three pairs of eyes glued to the glass. Paris in August. Secret Summer. An unforgetable summer. So on and so forth. It made me smile that we all love books so much. One of my friends asked how it was the trip to Strasbourg. Small, cute, cozy. It’s so rich in history that i’s like living in another time, another place unreal to the present. Is it better than Paris? Paris is different, I said. Paris has always been my love, so no matter what happens I’ll defend my city.

My dear friend said, yes, I love Paris too, but sometimes it hurts me. We all agreed. We all love the city too much and we are all suffering in its arms. The Korean liquor makgeolli still lingered in my head after a feast of samgyeopsal, making everything seem more tolerable as they blurred a little in my vision and in my thought. My friends took turn to complain about the City of Light’s rude inhabitants, including the famously intrusive pigeons. But aren’t they cute? With their pinkish turquoise neck that reflects light? I laughed as they cringed at the thought of ‘those rats that fly.’ Complaining is France’s national sport.

My affair with the city began in October the 14th 2011. It was love at first sight. Cultured, classy, compelling, Paris is very much like me and it isn’t. Same values and same dreams, different backgrounds and different takes on life. Artistic and philosophical, intimate and passionate, discrete and daring, the city is a charming blend of contrasts and contradictions. Its multifaceted, multicultural resilience thrives through difficult times with so much grace and generosity. When the Notre Dame Cathedral fell in April, my friend said she was shocked and sad at first, but then she felt much more hopeful as the church will be renovated and reconstructed, part of it will carry on its historical heritage, part of it will write new chapters of cultural and architectural continuation for years and years to come.

Near my workplace next to the Parc Monceau is my new discovery – rue de Lévis. It is the cute French version of my favourite street in Islington. They are both tiny walking streets lined up with small artisan and designer shops and bookstores, dotted with stalls of local marchandises. But unlike its London counterpart that retains remarkable English politeness and distance with a hint of warm self-deprecating humour, the Parisian street blooms in July, jolly and radiant in the summer air, resembling a Sunday’s fair in one of those Provence villages. I’ve never managed to go through it without buying at least one package of fruit, be it blueberries, raspberries, cherries or peaches, all fresh and fragrant and French. Paris, busy and chaotic as it is, is still much of a small town that hides well its pockets of sunshine.

I bingwatched short films in ‘Une fille, un style’ series by Vogue Paris. Those beautiful, distinguished and privileged girls are such light-hearted, joyful little beings that enjoy their life in Paris to the fullest. They remind me of my first impression and secret crush on the clichés of Parisian girls, born or adopted, with their glamourous ‘je ne sais quoi’ attitude that everyone envies. And at one moment it dawned on me, with some regret and bitterness but much relief, that I would never become one of them. Those kinds of life require too much courage, too much extraversion, they require the freedom and birthrights I don’t have. But they give me a sneakpeak into the heart and soul of the city, at once effortlessly sensual and fearlessly alive.

On my bad days, I often imagine me sitting on the wooden veranda of an old Kyoto marchant house looking out on the courtyard garden, slanting sunlight slipping through maple leaves, dancing on moist moss and on the drippling water surface in a stone washing basin after the rain. I would spend hours there in my head, because the Kyoto I have in mind is me, the quiet and reclusive me. But it has always been Paris that draws me out of the shell, that reminds me of being in the ‘here and now’, of enjoying and celebrating life, in big boulevards or small tiny streets, in romance and friendship and humanity. It nourishes and protects and challenges and pushes boundaries. It makes fun of me and has fun with me. At the end of the day, the city has become a part of me that flourishes and lives on.

Once, as I was walking with a friend across Pont des Arts towards the midnight bookstore on Boulevard Saint Germain, the Eiffel tower sparkled. We both marveled at this delightful encounter, happily enchanted like the first time. I looked at the city twinkling in her eyes and felt a deep sense of gratitude and love for those little wonders it offers freely. I grow up, things change, lovers come and go, but Paris will be in my heart, as it has always been. 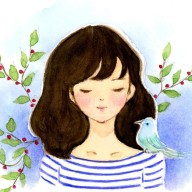